In the film, the Thanos character was primarily produced by Digital Domain, who did more than 400 shots. Digital Domain team used Autodesk Maya for modeling, rigging and animation; Chaos Group’s V-Ray for rendering; Side Effects Houdini for effects; a proprietary Maya plug-in called Atomic for lighting; and Digital Domain’s new Masquerade tool and their custom Direct Drive for transferring motion capture data to the CG character.

Framestore had the unique opportunity to be creatively involved in the planning of the work, with a team of 160 artists, led by VFX Supervisor Patric Roos and CG Supervisor Rob Allman, crafting the dramatic opening.

Roos supervised the shoot at Pinewood Studios, Atlanta in which large areas around Doctor Strange’s sanctum had been built, as well as the green screen, which the team extended to mimic Manhattan. The fight moves on to Washington Square Park, which was replaced in full CG. Framestore’s Capture Lab spent a month in Manhattan and New Jersey shooting photo reference, LIDAR and gigapixel panoramas to capture the the environments that had to be recreated in CG. ‘Production closed down whole city blocks’, says Richard Graham, CaptureLab Studio Manager. ‘We came back with more than 250,000 photos and 15TB of data to be used by the environments team to build Washington Square Park and the West Village, among others.’

Framestore tackled the character development of the Black Order members for around a year before post production, feeding into the Marvel Vis Dev group. A small in-house team created animation vignettes to delve further into their personalities and character traits.

The Black Order, or so-called ‘Children of Thanos’, presented their own challenges. Ebony Maw (Tom Vaughan-Lawlor) is tall, sinister, and the most restrained character of the group, delivering his lines in an almost deadpan manner. The animation team had to work out how much movement and expression to use, given that his facial design didn’t include a nose, a feature that usually aids a performance.

As the strongest of Thanos’ children, Cull Obsidian (Terry Notary) is the muscle of the Black Order. As one of the characters developed early on by the Framestore team, the challenge was keeping the design close to the comic book whilst still being a believable and threatening presence. ‘He has a massive torso, reasonably thin waist, huge thighs and a bunch of weapons’, says Nick Craven, Animation Supervisor. ‘So the challenge for animation was: how do you take a character who has aspects of a toy and keep him looking heavy and dangerous?’ The animators posed the character in a way that didn’t emphasis the silhouette, whilst the rigging team worked around the abnormally large biceps and unique bone structure, made up of pieces of bone protruding from his thick skin.

Iron Man has a whole new look in Infinity War. ‘Iron Man has a new suit design, which we worked on closely with Marvel for about two years before the design was locked in’, says Roos. Iron Man’s Mark 50 ‘bleeding edge’ suit is a move away from his solid suit of previous films: rather than unfolding, it is made up of singular nanobots which move around his body to form a suit. The manifestation of the suit moving around the character needed to look both organic and mechanical, with new weapons forming from it. The FX team used a bespoke FX set-up and Houdini to achieve the several layers of simulations and components required to look like a second skin.

Infinity War afforded Framestore the chance to work on Spider-Man for the first time. ‘I was a fan of the comic books as a kid; it was fun to revisit that,’ says Craven. Spider-Man is characterised by his dynamic and physical movement. Animators looked to past films for examples, and were often able to bring their creative flair to his performance. ‘They had pre-vised the Washington Square Park shots in a rougher form’, says Craven, ‘And I felt like we could really add some value to a lot of those shots, which was a great situation to be in.’

Within the 253 shots, Framestore also worked on the build of the ‘Q-Ship’, used by the Black Order; the Doctor Strange ‘Eldritch magic’, updated from the 2016 film; and an updated suit for Spider-Man. Fans were able to see a small glimpse of the Iron Spider suit in 2017’s Spider-Man Homecoming; it has an almost metallic-sheen, and allows the character to breathe in space as well as adding an additional layer of armour.

However, the most challenging aspect of Cinesite’s work was the creation of Ebony Maw, an important and entirely CG character seen in extreme camera close up.  Actor Tom Vaughan-Lawlor’s facial performance was captured using a head rig; this data, combined with set photography and witness-cam footage was used as a guide for the full body animation.  The team received artwork and a high-resolution digital sculpt, from which they rebuilt the character.

Further character animation was required for ensuing fight sequences’s loyal cloak!) battle to free Strange, and a later skirmish when they meet with The Guardians.  Both Iron Man and Spider-Man, newly transformed in his enhanced “Iron Spider” suit, were entirely computer generated.  In dialogue shots where their masks are removed rotomation was key to the successful integration of the actors’ heads with the CG suited bodies.

Weta and Digital Domain both did Look-Development work on Thanos. Weta’s shots were concentrated around the fight on Titan, and separate from Digital Domain’s work. It is a testament to the overall visual effects supervision and direction of the film that the two Thanos’ looked and behaved in such a unified way. Matt Aitken was the Weta Visual Effects Supervisor for Weta, who completed over 200 Thanos shots, along with another 250 of various other normal effects shots. 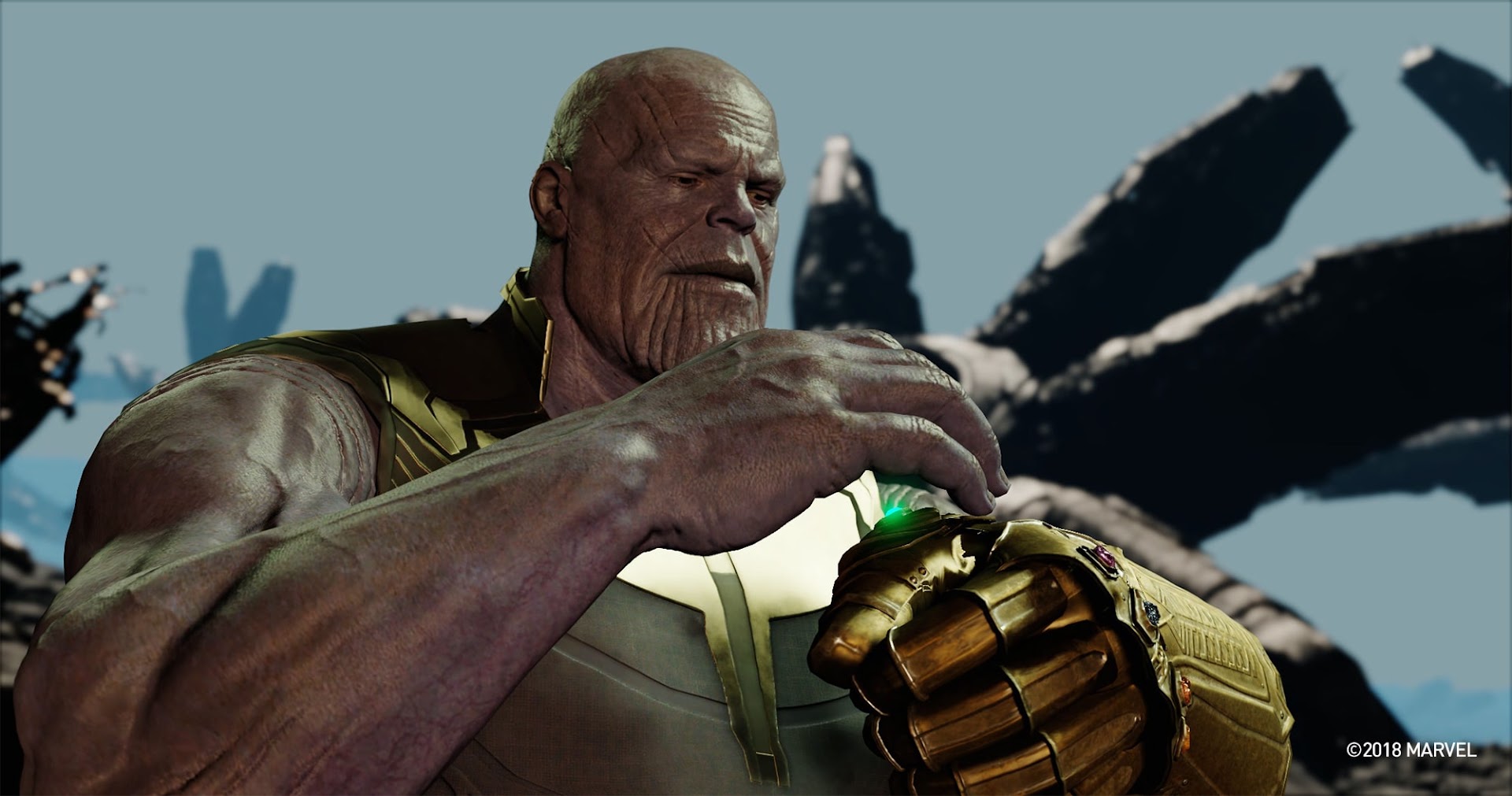 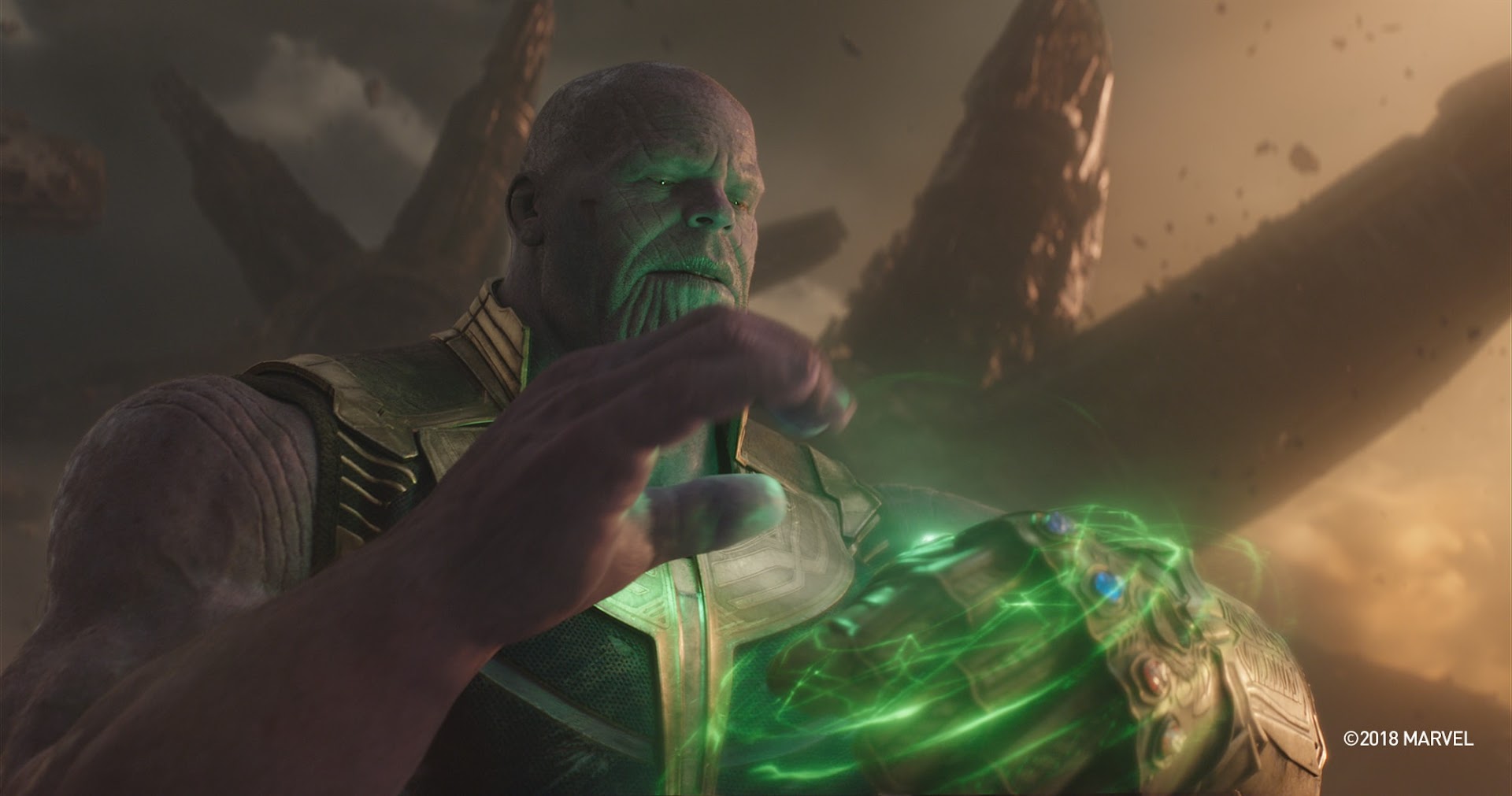 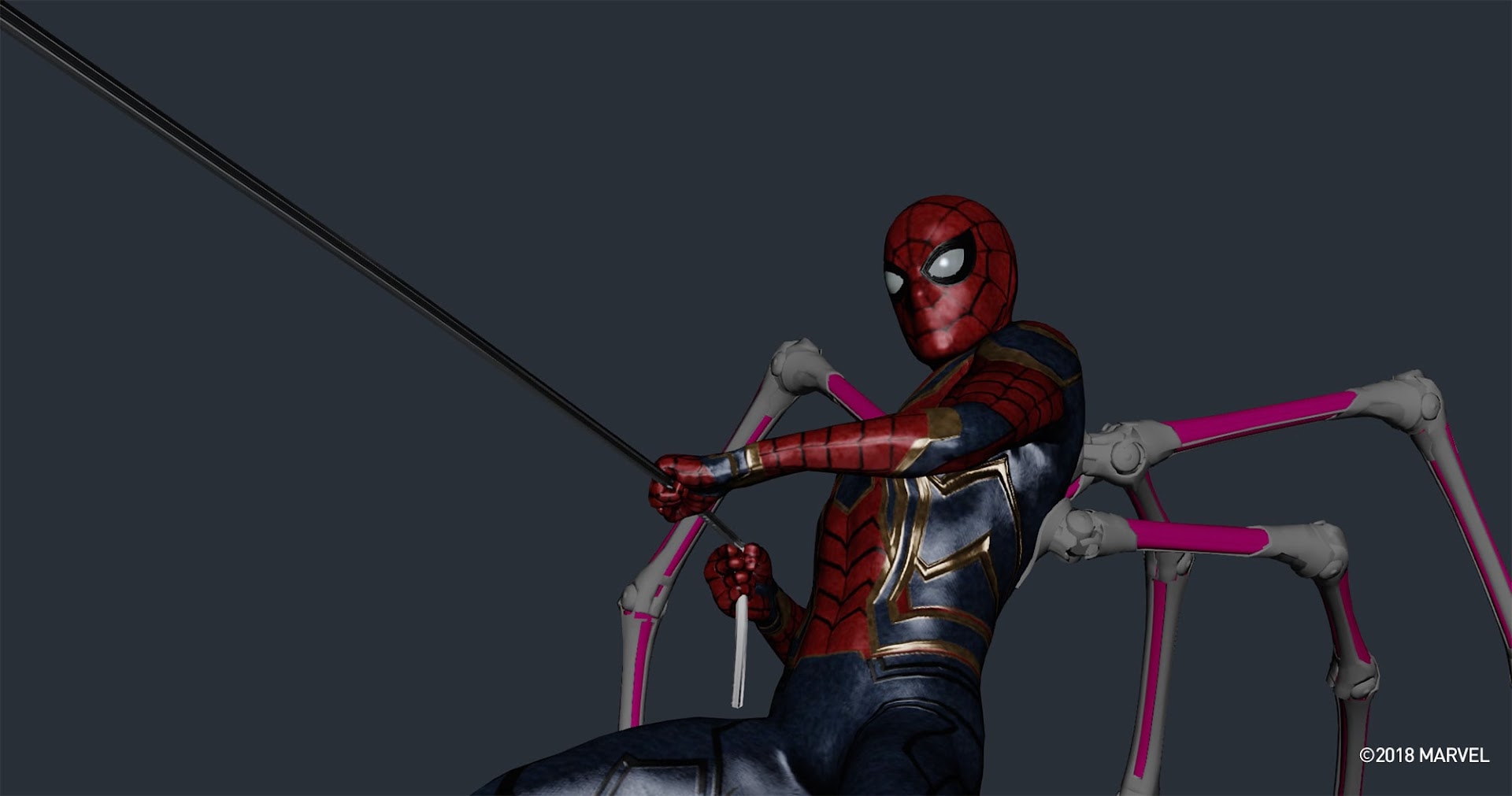 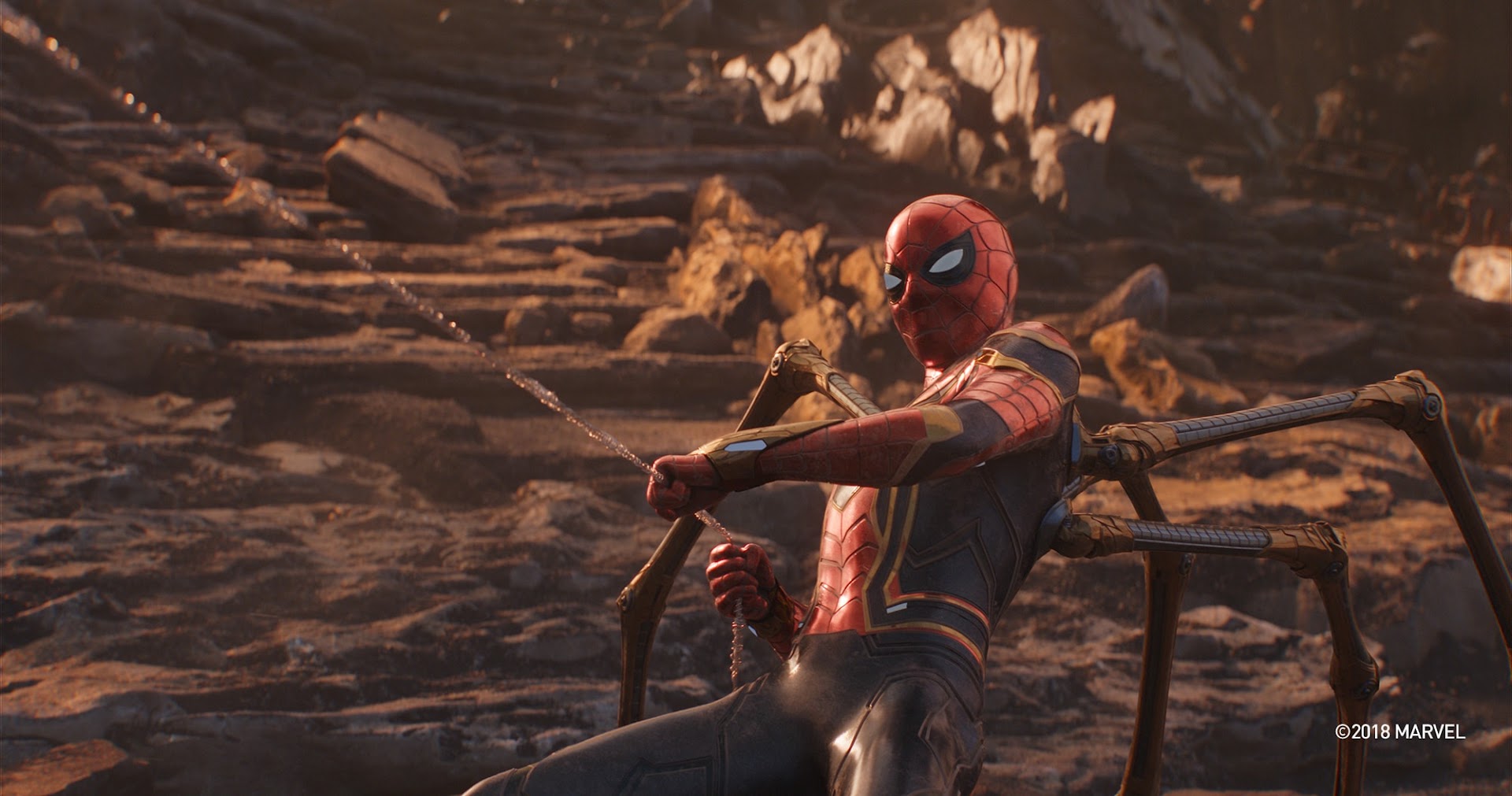 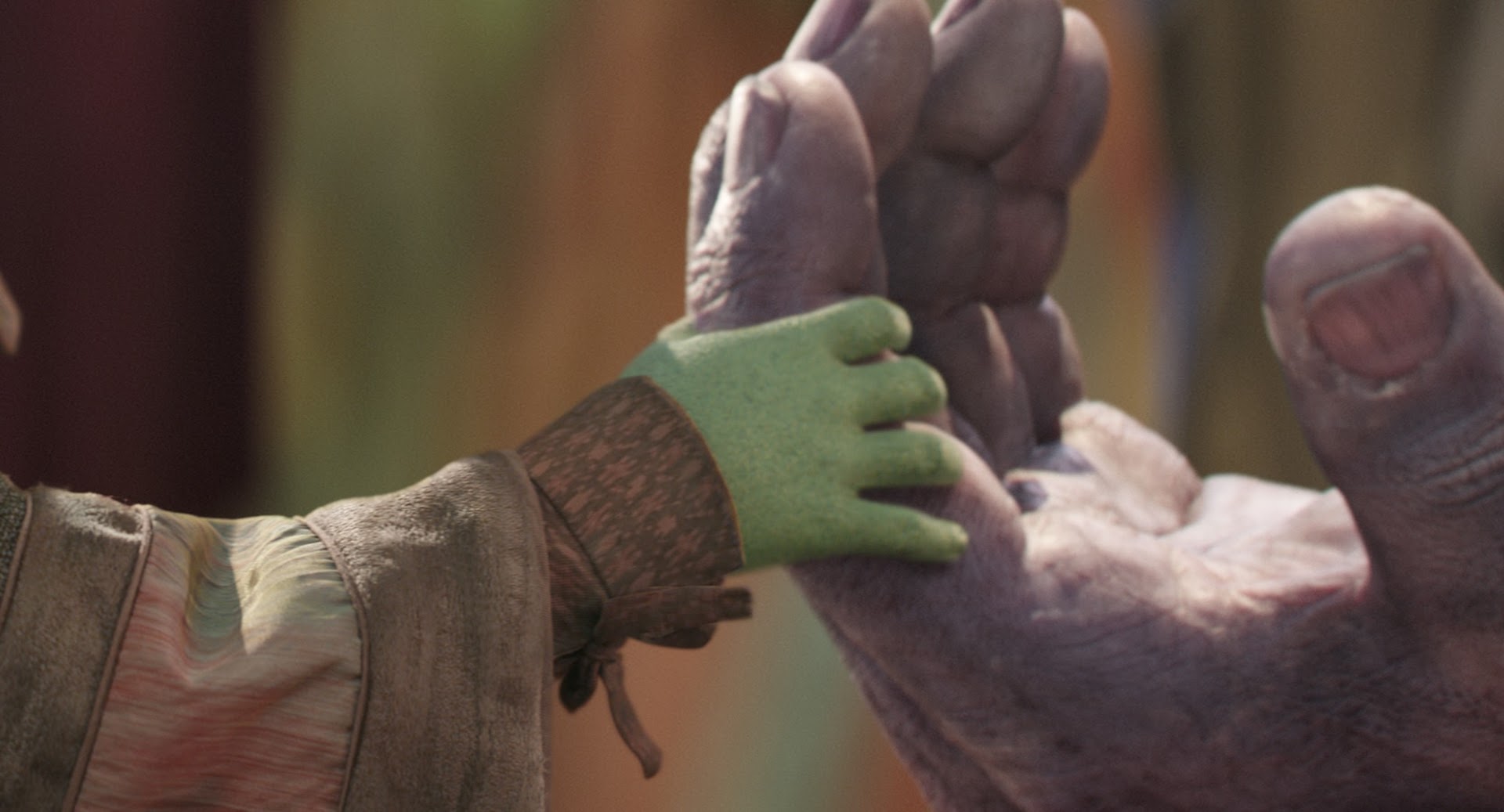 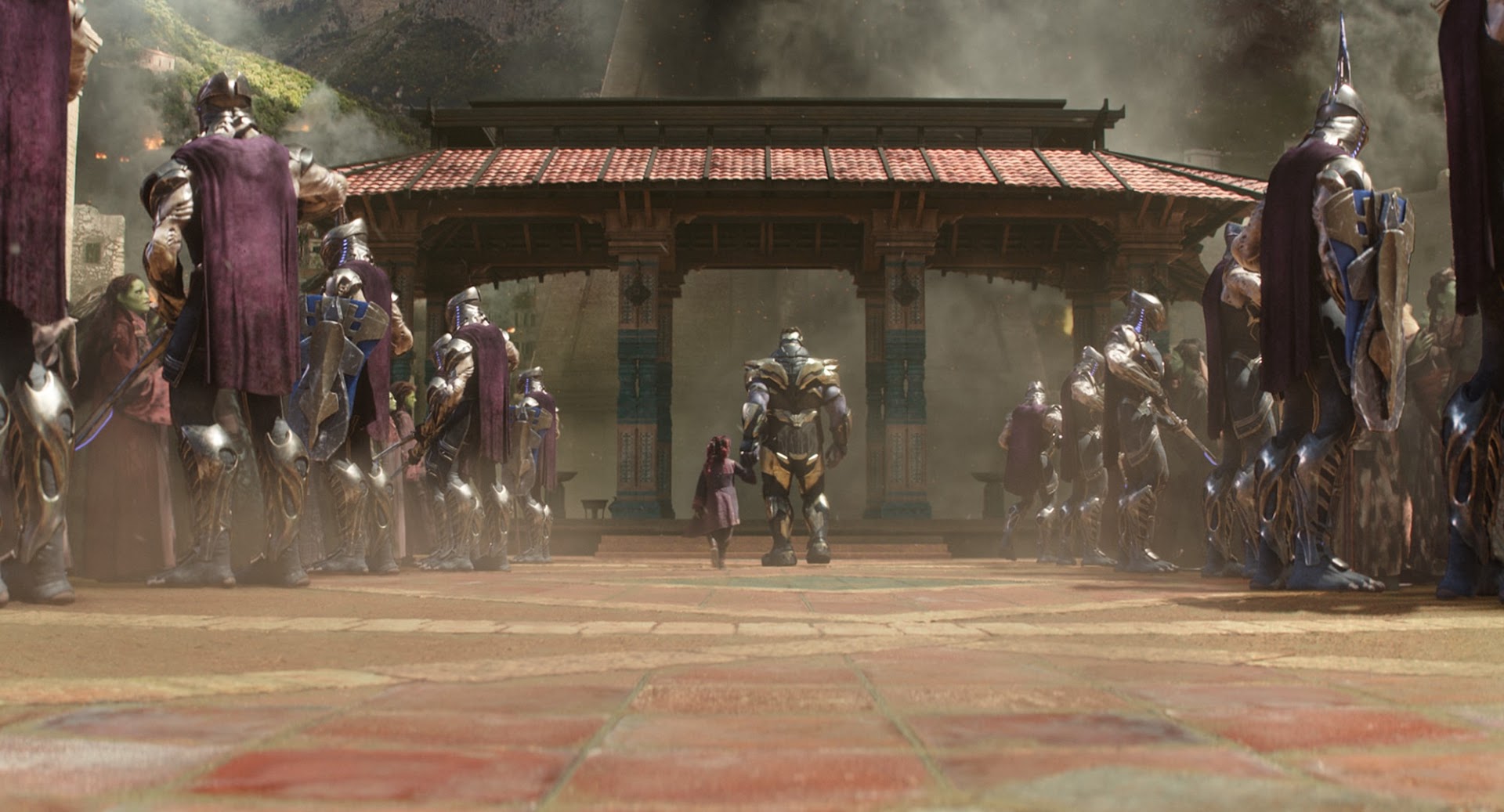 They created (410 Shots) nearly 24 minutes of CG content  including CG characters Rocket and Groot, the Guardians’ ship and escape pod, and the massive Nidavellir environment. Dan Deleeuw & Greg Steele lead as VFX Supervisor & Keith Roberts as Animation Supervisor. Rocket and Groot were primarily keyframed, and Groot had to be completely recreated as a new asset. Method collaborated with Marvel Studios to create and refine the design of the complicated Nidavellir environment, which comprised millions of parts. To convey the large scale of Eitri (Peter Dinklage), compared to average stature of Thor (Chris Hemsworth), production filmed separate passes for each actor, which Method helped blend. Method also created a digital double for Eitri, and digitally replaced his manacles. Additionally, artists added Thor’s eye patch, which is later replaced by a robo-eye. Greg Steele lead as VFX Supervisor & Keith Roberts as Animation supervisor at Method Studio.

DNEG  worked on 496 shots in the movie. DNEG  created additional motion capture for many of the shots using a Moven suit. Here is the few Breakdown stills done by DNEG

RISE VFX worked on 26 shots for the movie. For Avengers: Infinity War, VFX Supervisor Oliver Schulz  and his team turned Atlanta into Wakanda – and also into Central Park, NYC. They made jets fly, gave Bucky back his redesigned Winter Soldier arm and helped Doctor Strange travel though one of his portals.

The centerpiece – or the last piece in this case – of their work is a 1800 frames post credit scene that was completed in just 8 weeks from shoot to delivery, from actor scanning to actor disintegration, from FX design to completed assignment.

Rim of The World VFX Breakdown

June 27, 2019 admin Comments Off on Rim of The World VFX Breakdown

Behind The Scenes “The Addams Family”